Tickets are $40 and include an all-you-can-eat buffet, indoor space with balcony seats and an outdoor patio with tables to enjoy the game. Only 50 tickets are available for the event.

Gates open at 5:35 p.m. with the buffet available from 6:35 to 8:05 p.m. The NH Fisher Cats will the play Harrisburg Senators. An Atlas Fireworks show will take place at the conclusion of the game.

As a special benefit to YPRSA and VT/NH Marketing Group members, NH Fisher Cats President Mike Ramshaw will also meet with ticketholders before the game.

Yankee Chapter PRSA recently announced its alliance with the VT/NH Marketing Group. The alliance offers members from both organizations networking opportunities with industry experts from their respective communications disciplines.

This professional development session requires a ticket for entry. A ticket(s) will be purchased per your order. In the event you are unable to attend, the ticket cannot be canceled. You are responsible for value of the ticket(s) purchased on your behalf. If you cannot attend, you can transfer the ticket to a colleague. 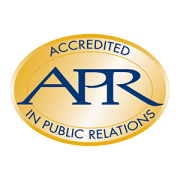 What is the APR? A symbol of professionalism and a credential that signifies reaching the highest standards in public relations.

Are you ready to earn your accreditation? During this five-hour comprehensive session, you’ll learn what it takes to achieve accreditation and the variety of resources available to you. The entire process will be reviewed, including how to prepare, what resources you need, and how to ace the Portfolio Presentation and the computer-based exam. You’ll also meet a recent APR and hear about their experience.

The class is taught by Jeff Paterson, APR, CEO of Empower, and Barb Byers, APR, director of content development for the UB Office of Donor and Alumni Communications.

The event "Navigating a Crisis with Legal Support" is no longer active.

A crisis can destroy any business. Winning the legal battle, while losing stakeholder support for the brand might mean there’s nothing left to fight for.

Protecting brands in litigation is complex, with companies defending themselves in the court of public opinion long before a court of law.

Navigating a crisis is the responsibility of everyone involved. Teams must work together to negotiate criminal, regulatory and civil proceedings as well as the media relations and social media challenges. Unfortunately, sometimes those competing interests create silos that complicate the process.

Scott O’Connell is chair of the Litigation Department and a member of the firm’s management committee. He is a trial lawyer known for his perseverance, strategic thinking and value-driven service for clients. Scott focuses on class action and aggregate litigation and corporate governance and control contests. He is currently representing financial services, life sciences, manufacturers and healthcare companies in high exposure disputes with associated significant reputational harm in parallel civil, criminal and regulatory proceedings.

On Tuesday, February 20, at 6 p.m. the NH Institute of Politics at Saint Anselm College will host five of the nation’s top political journalists who will examine the dynamic state of journalism in an unprecedented political climate.

Becoming accredited in public relations (earning your APR) is a mark of professionalism that sets you apart from your PR peers. The standards are high; that’s why the Yankee Chapter is proud that about 33% of our members are accredited. Join us! We offer workshops and the opportunity to join a study group with a proven path to accreditation. Accreditation Committee Co-Chairs Jane Law, APR and Mary Ellen Hettinger, APR are working on a schedule of sessions for 2018 and can help you take the first step. Interested? See link, http://apps.prsa.org/learning/Accreditation/#.WJSuzjsrJdg then contact us.

Is it time to step up your game? Becoming accredited in public relations (the APR) is a mark of distinction and professionalism. The APR demonstrates your mastery of strategic communications and your commitment to the highest standards of ethics, and lifelong learning. Yankee Chapter’s Accreditation Committee, Jane Law, APR and Mary Ellen Hettinger, APR invite you to join the 30% accredited members and fellows in our chapter.

In the age of hashtags, trends and social media, could empathy be the key to effective transformational leadership and meaningful business practices? Empathy is being called the hottest trend in leadership and companies are training their executives to use more empathy in the workplace, and implementing the use of customer empathy maps to better connect to customers. This session will give participants the opportunity to discuss strategies and tools that can improve organizational performance.

Sophia is currently instructing Organizational Leadership courses for SNHU College of Online and Continuing Education School of Business. She is fascinated when concepts taught are also encountered in real-life situations and projects. Passionate about the arts, with extensive knowledge and experience in management and organization of large and small-scale cultural events and productions. Uses a creative approach, personalized design, and strategic style that cater to the organizational needs. Great interest in Leadership, Entrepreneurship, Innovation, Corporate Social Responsibility, and Biomimicry as these evolve in various industries. PhD student at Northcentral University studying Industrial Organizational Psychology.